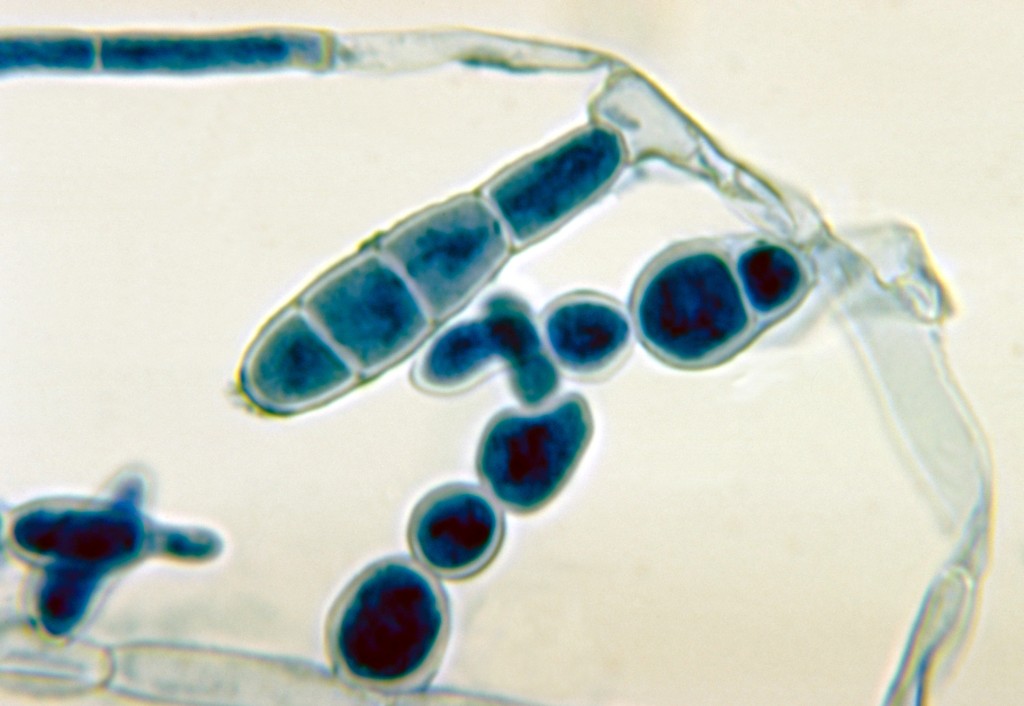 Epidermophyton floccosum – one of several dermatophytes that can cause tinea infections.

Tinea, or more commonly called “ringworm,” is an infection of the skin that can be caused by a fungus, dermatophytes (a specific type of fungi), or possibly mold species. These infections account for roughly 10-20% of entire skin infections around the world.

The variety of the diseases varies based on the site of infection, the frequency of contact and proximity to animals, location, and even cultural practices [1]. Both sexes, all ages, and individuals from different socioeconomic statuses are equally susceptible to catching these infections [2].

Although the species that cause ringworm vary, many treatments are available over the counter without a prescription.

How is “Tinea” Related to “Ringworm?”

“Tinea” is the medical term used to describe the infection. Ringworm is the more commonly used name and often refers to infection of the body specifically, also called “tinea corporis”.

In general, both names are followed by a description of where the infection occurs. For example, “tinea versicolor” refers to the infection of the torso and arms, while “ringworm of the scalp” refers to an infection within the hair follicles and scalp areas.

The term “ringworm” or “tinea” refers to an infection of the skin, hair, or nails caused by a variety of organisms. Some species that cause infection are commonly found on healthy and normal skin. However, occasional outbreaks may cause the fungus to spread more than normal, while other infections are transmitted from direct contact with an infected person, animal, or object.

Areas that tend to sweat more and stay moist or warm throughout the day are more susceptible to infection. Practicing good hygiene is important to prevent the spread of disease.

Since some of the tinea-causing species are part of the organisms that are normally found on the skin, a few are not contagious. The most notable exception is tinea corporis (“ringworm of the body”), however, which is highly contagious and can be easily transferred from person to person.

In most cases, tinea infections are non-life threatening but may cause discomfort and cosmetic discoloration. Common tinea infections include ringworm of the scalp, ringworm on the skin and body, and “tinea versicolor” which may also affect the body. Ringworm infections are usually classified by the species as well as the site affected on the body:

The range of symptoms for tinea and ringworm infections are wide and depend on the particular site affected. For instance:

Tinea versicolor – Cosmetic marks which can be hyperpigmented, hypopigmented, or red (“erythematous”) spots on the skin.

Tinea corporis, “ringworm” – Reddish ring-like shapes with a clearing in the center. Rings cause mild inflammation, itchiness, and general discomfort.

Tinea capitis, “ringworm of the scalp” – Black dot appearances on the scalp where infection at the root has caused the hair shafts to break. Persistent infection can cause localized balding around the area.

Different infections can appear in a range of areas on the body. For instance, tinea capitis typically appears on the scalp while tinea corporis can appear anywhere on the body.

Diagnosis of the infection can be performed visually by a physician, and further analysis can be performed by isolating species for testing through gentle scraping of the skin. A “Wood’s lamp” light may also be used as a quick method since some species of tinea tend to fluoresce under certain wavelengths of light.

Since there may be multiple species involved in infection, there are a wide variety of treatment options available over the counter (OTC) and also by prescription.

Different scientific studies have shown variable efficacy of treatment for each type of ringworm infection. The majority of active ingredients normally used to combat infection include azoles, terbinafine, and sulfides to name a few [2].

General treatment will depend on the site of infection and the species involved. Thorough testing of the causative species will help to narrow down the treatment options for maximal efficacy, but general antifungal agents have proven to be effective in addressing a variety of infections.

Common methods for ringworm treatment include either topical creams or lotions as well as oral medications each with a number of active ingredients. A variety of options are available over the counter while others are provided by prescription only [3].

More information on antifungals and treatment options can be found on Antifungal Creams and Active Ingredients.

Dermatophytes – Any species in the Microsporum, Epidermophyton, or Trichophyton genera which cause tinea infections.

Erythema – Redness and inflammation of the skin due to irritation and increased localized blood flow to the site of infection. In the context of tinea, this symptom usually occurs in an outer ring-like manner with a general clearing of redness towards the center.

Hyperpigmented – General darkening of the skin due to an increase of pigment or melanin.

Hypopigmented – General lightening of the skin due to a lack of pigment or melanin.

Pustule – An elevation or bump on the skin filled with white or clear fluid. This is typically caused by infections and your body’s immune response to fight off the invading species.

Skin Fauna – The collection of naturally occurring organisms, species, and microorganisms on the skin.

Wood’s Lamp – Also called a black light or ultraviolet light. The light is simply shined on the area of infection while in the dark, and the presence of tinea is exhibited by the fluorescent marks.