Tinea versicolor (also called “pityriasis versicolor”) is a fungal infection caused by several Malassezia species which can occur on any place in the body but mostly infects the chest, back, and upper arm areas. The fungus tends to grow on areas that sweat, therefore, most infections occur on these body parts. Relapse can become frequent and chronic depending on a number of external environmental factors, and there exists an indication of the disease prevalence decreasing slightly with age [1]. This infection is more commonly found on individuals that live in warmer and more humid climates, and according to the American Academy of Dermatology, it is among the most common skin infections found in these areas [2]. However, unlike other fungal infections of the skin, tinea versicolor is not contagious.

Appearance of the disease can vary between individuals but usually leads to small circular spots of either lighter “hypopigmented” or darker “hyperpigmented” areas. The color of the spots can differ between individuals, but each person usually exhibits just one type. The spots themselves usually have well-defined borders, and multiple infections can fuse together over large areas if left untreated. The spots tend to flake off (especially when scraped) and may become itchy when the body gets warmer (e.g. during exercise). Even after successful treatment, it may take time for the spots to eventually fade. 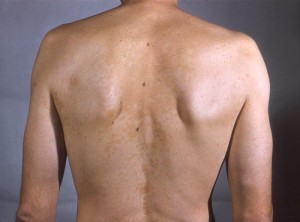 Tinea versicolor infection due to Malassezia furfur species depicted on a patient’s back and upper torso.

Although the yeast that causes the infection is commonly found on the skin, the reasons which lead to overgrowth is currently unknown. There are common factors, however, that correlate with tinea versicolor overgrowth:

The Malassezia species reside primarily around hair follicles and sebaceous glands – areas of increased oil activity. Because of the indication that the infection can be climate-dependent, the spots may appear more frequently during hotter seasons and may exhibit seasonal relapses.

Common antifungal treatments include topical creams as well as prescribed oral regiments if large areas of the body are affected. Active ingredients that are commonly recommended or prescribed to start include selenium sulfide and ketoconazole [3]. Typical treatment options call for prolonged exposure to the ingredient (5-15 minutes) before washing off as well as consecutive treatment twice daily for an extended period of time (one to four weeks). Some protocols may call for leaving the ingredient on for as long as 24 hours before washing off. More so, exercise followed by a delayed rinse (i.e. inducing sweat) may be recommended when taking an oral antifungal regiment for more effective treatment.

Since the organism that causes tinea versicolor is normally found on the skin, there are no known methods for effective prevention at this stage. Common recommendations include keeping the affected areas of skin dry as much as possible throughout the day. Frequent washing of clothing may also help to prevent the spread of disease through previously worn clothing items. Also since the yeast is part of the normal flora on the skin, relapse is known to occur in 60% and 80% of individuals after the first and second year of successful treatment [2].