Ringworm (tinea corporis) is an infection of the skin caused by a variety of dermatophyte fungal species.  It can usually be treated by a number of creams and lotions available over the counter.

The options for ringworm treatment are varied and each of them may be uniquely effective against a particular species of infection. Others are more attractive based on the type of treatment (e.g. lotion, cream, or shampoo) as well as safety and overall preference (e.g. home remedies).

For a broad overview of the types of active ingredients included in some ringworm treatments, see: Antifungal Creams and Active Ingredients.

In most cases, it is recommended to apply the cream on an area much larger than the site of the ringworm. Usually, applying the cream a few centimeters beyond the outer ring of infection is sufficient. Also, it is often recommended to allow the treatment to remain on the skin for a period of a few minutes to several hours before washing off. This allows for the treatment to have maximal effect and exposure to the ringworm infection.

Symptoms may take a few weeks to disappear even with daily treatment. Even then, most manufacturers will recommend to continue applying the cream for 1-2 weeks after the ringworm disappears. This ensures complete treatment for any remaining fungal cells on the skin.

Since most ingredients in ringworm treatments are considered to be “broad spectrum,” you may find that several brands containing the same ingredient are marketed for a variety of fungal infections including jock itch (tinea cruris), ringworm of the scalp (tinea capitis), athlete’s foot (tinea pedis), etc.

The over the counter ringworm treatments below can be grouped into two classes of compounds: azole derivatives and allylamines. Each of these class of compounds work against the fungal species through different methods. 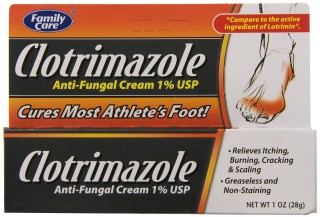 Most antifungal creams will work by blocking a critical part of fungi survival. In the case of clotrimazole and similar azole-based drugs, it blocks the formation of “ergosterol” which is a major component of the fungal cell wall. This has the effect of preventing the fungi from spreading.

Over the counter clotrimazole treatments typically come in a 1% solution and are often combined with betamethasone. This extra ingredient is a corticosteroid, and it is used primarily to reduce swelling, itching, and redness of the affected area.

Lotrimin is one of several brand names that manufactures the antifungal cream, however, there are also a number of over the counter generic manufacturers that provide the same clotrimazole active ingredient. The example linked below contains the same percentage of clotrimazole (1%) as the brand name Lotrimin treatment. The topical application instructions of the generic treatment is also similar to Lotrimin.

Ketoconazole, like clotrimazole, is a common over the counter cream for ringworm treatment and is also useful for treating additional tinea infections including athlete’s foot (tinea pedis), jock itch (tinea cruris), ringworm of the scalp, and tinea versicolor. It’s method for treating the ringworm infection is also similar to clotrimazole as it prevents the fungus from spreading.

Typical concentrations include a 1% shampoo and 2% cream. The application is similar to clotrimazole with a recommendation of daily treatment for several weeks even after the ringworm disappears.

One example found on Amazon includes a shampoo treatment specifically for targeting ringworm of the scalp.

A topical ketoconazole cream is available by prescription. Most online searches for “ketoconazole cream” for topical applications will refer you to products with similar active ingredients e.g. clotrimazole or miconazole, not necessarily ketoconazole per se.

Ketocoanzole is also available orally through prescription in several countries. This method of ringworm treatment is often recommended when the area of infection covers a large surface of the body. Additionally, some physicians may recommend mild exercise while taking the treatment in an effort to “draw out” the ingredient on the skin through perspiration.

Caution should be taken when administering ketoconazole orally, however, due to known liver side effects. Your doctor may recommend a blood test as a precaution before prescribing the treatment. Less toxic alternatives may also be suggested for ringworm treatment – including fluconazole and itraconazole. 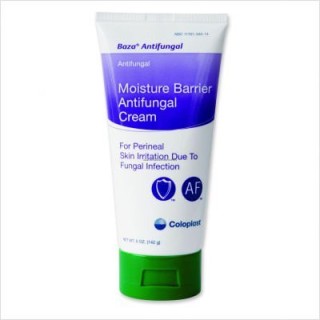 Miconazole is another treatment in the azole class of compounds with similar properties to clotrimazole and ketoconazole. It typically comes in the form of miconazole nitrate in a 2% topical cream and is marketed under several brand names including Lotrimin AF as a spray for jock itch (tinea cruris).

Similar to clotrimazole, over the counter generic brands are also available as substitute ringworm treatments. The recommended application method is also similar to that of brand names.

Aside from its use in treating ringworm, miconazole is also known to be effective against certain bacterial infections. More commonly, it is also marketed as a treatment for vaginal yeast infections under the brand name Monistat 7. 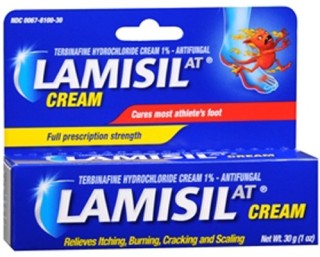 Terbinafine is a ringworm treatment in a separate class of compounds – the allylamines. These compounds also target the fungal infection but through a different mechanism involved in their growth.

It’s available over the counter as well as by prescription, and it comes in various forms including: gels, creams, lotions, and sprays. Topical creams are typically 1% concentrated and require application twice daily for several weeks (4-6).

There is also evidence supporting the fact that this particular class of compounds may be more effective against certain fungal species even with a reduced treatment time [4].

Griseofulvin is an orally available antifungal that is used to treat most forms of ringworm – body, jock itch, hair and scalp, athlete’s foot, and nails, and is known to be effective against a wide variety of dermatophyte species. It is produced by the Penicilium patulum fungus, and it is known to be less effective when applied topically. Griseofulvin may be prescribed when common over the counter ringworm treatments are not effective.

The compound works by interfering with a special structure within the fungus, “microtubule”, which also plays a critical role during cell reproduction. In essence, Griseofulvin prevents the fungus from continuing to spread.

It may be prescribed as a once a day treatment, or you may be required to take several doses daily. Example dose amounts range between 250-500mg for adults daily. For children, a dosage amount based on weight is usually recommended.

Griseofulvin may be marketed under several brand names including:

Naftifine is an antifungal treatment normally sold as naftifine hydrochloride. It is sold under the brand name Naftin, and it belongs in the class of allylamine treatments. It’s available by prescription in a 2% cream or gel for ringworm treatment.

Naftin cream’s mechanism for treating ringworm infections is not exactly known. As an allylamine, however, there is an indication that part of its effects occur through a similar mechanism to that of terbinafine. Overall, it works by preventing the fungi from spreading further.

The manufacturer recommends to apply a thin layer on the skin once daily for two weeks. Like most topical creams, it is recommended to apply the treatment to surrounding skin beyond the affected area as well.

As an allylamine-based treatment, acquired resistance by tinea infections is not as large as an issue with naftifine (and other allyalmine compounds) as it is with azole-based treatments (e.g. clotrimazole, ketoconazole) [3].

Although a variety of FDA approved and safe compounds exist, a number of natural treatments and home remedies claim to be effective in treating ringworm infections. See Home Remedies for Ringworm and Tinea Infections.

What’s Right For Me?

A topical antifungal may be effective for most ringworm treatments, however, it is best to consult with your doctor regarding the treatment methods and options available.

Typical ringworm treatments may entail a lotion or cream with a range of ingredients including: clotrimazole, miconazole, terbinafine, etc. Further analysis into the main species of infection, however, may be warranted in an effort to select the most effective treatment known.

Potential side effects, complications, and drug interactions can also be discussed with a trained physician. If any adverse reactions are noticed when using a particular ringworm application, treatment should be stopped until notice from your physician. As with all possible side effects, the benefits of a particular treatment should be weighed against the potential adverse effects.

Do you have any personal success stories with a ringworm treatment that you would like to share? Send us your name, location, treatment used, and before & after pictures, and we may feature you here on this site! Email admin@tineatreatment.com.

Allylamine – A class of compounds that work by inhibiting a specific component of fungal cell reproduction known as “squalene epoxidase.”

Ergosterol – The cholesterol analog of fungi and protozoa which serves the same or similar functions to that of cholesterol in humans. A main role is in the formation of the cell wall of these organisms and has become a popular target for developing antifungal treatments.

Microtubule – A critical component of the fungal cell structure. It is involved in cellular division and is often a pharmaceutical target for drug treatment.

Over the counter – Referring to a medicine that is available without a prescription at your local pharmacy or drug store.