Ringworm commonly affects different parts of the human body, but it can also affect your own pets. Ringworm, or “tinea”, is an infection caused by fungal (dermatophyte) organisms as oppose to a worm. The name is derived from the ring-like appearance of ringworm on the body (tinea corporis) with an outer reddish ring followed by a clearing in the center. A similar appearance takes place in dogs infected with ringworm as well with areas of hair loss and scaly patches occurring on the skin. 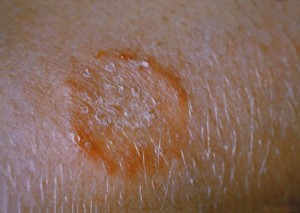 Typical signs of ringworm in dogs include noticeable areas of skin with abnormal cell clusters, reddening or darkening of the skin, hair loss, and itchiness. One of the more common symptoms includes a rounded area of hair loss usually on the skin of the face, ears, tails, and paws. The infection causes the hair shafts to weaken, which will cause the hair to eventually fall off. It is common to see several patches or areas of infection throughout the body.

Occasionally, ringworm infections may also occur within the nails of your pet. This causes the nail to become brittle and easily broken. In rare cases, a dog may be a carrier for the ringworm species but may not display signs of the infection for various reasons.

What causes ringworm in dogs?

Is ringworm in dogs contagious?

Ringworm is highly contagious, and proper care should be taken if you notice symptoms on your pet. Ringworm in dogs, and pets in general, can often be transmitted to humans as well as other animals. The infection can also be transferred from humans to pets.

Spreading often occurs through direct contact of the skin or through objects that may be in contact with the infected areas (e.g. combs, brushes, etc.). Fungal spores can remain viable on objects such as combs or brushes for up to several months. It is common for ringworm outbreaks to occur in kennels, animal shelters, and areas with multiple dog activities. It is important to wash your hands and clothes after contacting an infected dog to prevent further spread of the fungus.

One of the more common treatments prescribed by veterinarians is griseofulvin oral therapy. The common name for this treatment is Fulvicin, and it comes in doses between 125mg to 500mg. It is also administered in the form of a tablet, capsule, or oral liquid. Griseofulvin is usually administered in combination with food, and is normally not taken on an empty stomach. Consult with your veterinarian regarding possible side effects and any precautions while your pet is taking the medication.

Apart from Griseofulvin, additional treatments may include other antifungal creams or lotions. These over the counter ringworm treatments for dogs contain the same active ingredients as the majority of treatments for humans. Topical treatment methods usually require continuous application for several weeks until symptoms disappear.

Depending on the severity of infection, your veterinarian may prescribe a combination of treatment types. For general information on ringworm treatments, see: Tinea (Ringworm) Treatment.

Has your dog been affected by ringworm? Send us your info to be featured on this site! Send your name, your pet’s name, location, and picture(s) to admin@tineatreatment.com to be considered for posting here.