Ringworm (i.e. tinea corporis) and tinea infections in general are common skin problems that arise from naturally occurring dermatophyte organisms. Although there is no absolute cure since it arises from species that normally reside on the skin, there are a number of home remedies for ringworm that can be used to treat the infection aside from using pharmaceutical creams and FDA-approved drugs. The information online for home remedies for ringworm varies from natural oils such as coconut and olive oils to ingredients such as camphor and myrrh. The list below entails natural ringworm cures that have been backed by research as effective against dermatophyte infections.

Among the number of active compounds in garlic, emphasis has been placed on ajoene [1] and sulfides [2] as the major active components to it’s antifungal properties. Ajoene has been shown in research and in the clinic to have effects as an antithrombotic, anti-tumoral, antifungal, and antiparasitic [1], while garilic’s sulfide properties indicate having effects in penetrating fungal cells [2].

Mince or puree a few garlic cloves. Add water if necessary to make the mixture more easily applicable. Apply directly on the infected area as well as beyond the ringworm and leave it on for one to two hours. Wash off and repeat twice daily for three weeks for maximum efficacy. 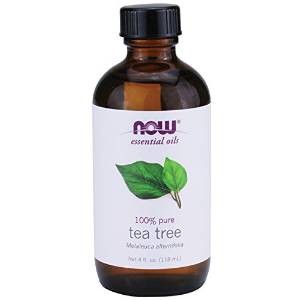 Tea tree oil, otherwise known as “oil of melaleuca,” has been shown to be an effective antifungal agent, specifically in cases related to open wound exposure, while causing minimal harm to human cells [3]. It has also been shown to be an effective treatment for ringworm of the skin on other parts of the body, namely on the feet (“tinea pedis”) [4]. There is also an indication that the compound can be used as a cure for ringworm on the skin.

100% pure tea tree oil can be used on the skin as a home remedy for ringworm. However, if your skin shows signs of irritation, it can be diluted with warm water to a more comfortable concentration. Place a few drops of the oil (or diluted oil) on a sterile cotton swab and apply several times daily for a period of a few weeks. Continue applying for a week after the ringworm disappears [5, 6].

Turmeric oil and a major component separated from the oil, Ar-turmerone, have been shown to be an effective home remedy for ringworm treatment. The antifungal properties of the compound has been shown to effect a variety of dermatophyte skin infections – including species that cause tinea and ringworm infections [7]. The main ingredient, Ar-turmerone, was shown to be as effective as ketoconazole against a variety of tinea infections (including T. rubrum, T. mentagrophytes, M. gypseum, and E. floccosum) but at a lower concentration of the compound. The authors of the cited study also indicate that the oil form of the compound was more effective than the cream-based form [7].

The application of tumeric oil for curing ringworm is similar to that of the above process mentioned for tea tree oil: Place a few drops of the oil on a sterile cotton swab and apply several times daily for a period of a few weeks. Continue applying for a week after the ringworm disappears [8].

Although there is no set treatment regiment for acetic acid for ringworm infections, it is generally recommended to apply a vinegar solution (diluted if necessary) to the affected area and beyond for a few minutes before washing off. Repeat the process several times daily for maximal efficacy and for several weeks even after the infection disappears.

[5] Livestrong.com: How to apply tea tree oil for ringworm