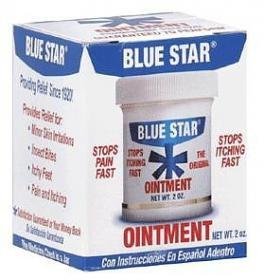 Blue Star Ointment is an over the counter ringworm treatment, and it’s main active ingredient is 1.24% camphor. Evidence suggests that camphor is highly active as an antifungal agent against a variety of microbes outside of ringworm infections [1]. When compared to the activity of neem, castor, and citronella oils, camphor showed a higher efficacy in removing certain microbes.

Although the evidence comparing camphor efficacy on ringworm infections is scarce, there is some indication that the ingredient is at least as effective as a few standard ringworm treatments – fluconazole and ciprofloxacin [2].

Blue Star Ointment’s main active ingredient, camphor, is a naturally occurring compound derived from the bark and wood of the Cinnamonum camphora tree and is used as a general antimicrobial agent. It is likely a safe ingredient [3] as a topical cream and is used at a significantly low enough amount below the recommended concentration maximum of 11%. However, it is generally not recommended for children to use Blue Star Ointment due to an increased sensitivity to the treatment, and the side effects of topical application of the cream during pregnancy are unknown [3]. In general, Blue Star Ointment is for external use only.

Aside from camphor, there are a number of over the counter ingredients which are also marketed as natural ringworm treatments. See Home Remedies for Ringworm and Tinea Infections. Many of these compounds can be found in it’s pure form without the additives included in Blue Star Ointment. However, there may be benefits to using lotions or creams that have a variety of active antifungal compounds. You can also buy pure camphor direct from Amazon:

Blue Star Ointment’s manufacturer recommends to apply the cream 3-4 times daily until the ringworm begins to disappear. Wash and dry the affected areas before use, wash bed linens, and wash laundry frequently during treatment. It is also recommended to continue application for up to one week after the symptoms disappear to ensure complete ringworm treatment and eradication. The cream is also marketed as a treatment for additional tinea infections including: athlete’s foot (tinea pedis) and jock itch (tinea cruris). As a side note, large tinea infections of the body may require more than a single two ounce bottle provided by the manufacturer.

In general, reviews for the product are positive on Amazon. Most individuals use the cream for a variety of skin problems and tinea infections including general rashes, poison ivy, athlete’s foot, and even as a general moisturizer. These reported uses are also verified and marketed on the manufacturer’s site. Some note, however, that application of too much of the ointment can irritate or sometimes burn the skin.