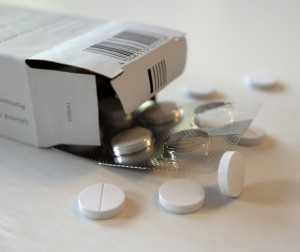 Among the variety of creams available over the counter or by prescription for treating fungal skin infections, there are a number of common active ingredients. Since the discovery of amphotericin B and imidazoles, antifungal therapies have evolved to become effective drugs in combating a number of fungal infections. Throughout the last few decades, heavier emphasis was placed on developing similar broad-spectrum drugs to mimic azole chemistry as the severe side effects and toxicity of amphotericin B became unfavored [1]. These antifungal agents were initially developed to overcome life-threatening diseases, however, more of these compounds soon became available over-the-counter to treat superficial skin infections as well.

Ketoconazole was the first azole antifungal compound to exhibit pronounced effects against a broad spectrum of infections. More specifically, ketoconazole has been shown to cure 90% of cases of superficial Tinea versicolor when taken orally [1]. Because of its prolonged effect on the skin, ketoconazole antifungal creams may typically be applied only once daily for several weeks. In very rare cases, serious side-effects have been reported when taken via oral administration.

Due to poor metabolism of the drug, miconazole has typically lower efficacy when taken orally versus topical applications [1]. It has been shown to be highly effective at concentrations between 0.5-2% as a cream or lotion for most topical fungal infections. Unlike ketoconazole, miconazole typically requires more applications per day as well as an extended treatment time.

Fluconazole has been shown to exhibit contradictory results in experimental studies when comparing treatment in a dish versus treatment in animal models [1]. The compound exhibits high efficacy for a number of infections in animal models but fails to exhibit them in simplified cell models. In general, fluconazole’s antifungal effects show less potency across a variety of infections when compared to clotrimazole and ketoconazole [1] but may still be considered a good option for other types of infections. Also, because of it’s lower efficacy, a longer dose-regiment may be prescribed by your doctor [2].

“Ringworm of the scalp,” or tinea capitis, has been shown to be effectively treated with selenium sulfide-based shampoos [7]. Although this particular species can appear anywhere, more common treatments involve areas of the body covered in hair. Selenium sulfide is more commonly available incorporated into shampoos, but creams containing 2.5% of the ingredient can also be found for topical applications. Additional options, including the ingredients listed above, can also be prescribed as a second line of treatment.